Up in Smoke and Gone Forever 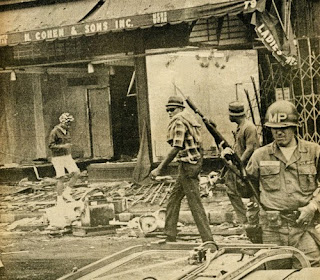 I talked to somebody a while back who remembers the 1967 race riots in Newark. The mostly black rioters there ended up destroying movie theaters, night clubs, bowling alleys, restaurants, small factories, mom and pop stores, and even a couple of grocery stores (costing the area thousands of jobs and prompting the white populace to flee). It was an full-bore hell on earth and the city TO THIS DAY hasn't recovered. You'd think that the people of these urban areas would have learned from this that the answer to grievances (real AND perceived) is not to destroy your own damned neighborhood but to hold the politicians that you continue to vote for over 90% of the time accountable and ask them to maybe try a little something different for a change (like, I don't know, making it a lot easier for people to start a business, giving the poor families of the city some school choice, etc.). Maybe?
Posted by Will "take no prisoners" Hart at 10:40 PM

I have talked to several who survived the Detroit riots of the same era. and their accounts are exactly the same.

Bernie Sanders is being talked about a lot lately, Will. Do you think his $15 minimum wage hike would make this problem better, or worse?

And how would it affect black/youth poverty, which has soared under Obama's policies?

Much worse, in that the black teen unemployment rate in places like Detroit and Chicago, etc. would go from 80% to 100% rapidly.............Speaking of Chicago, it should be pointed out that the damage from the rioting there was much less pronounced because they had a mayor, Daley, who was a strong law and order guy who wasn't going to take any guff from the hooligans.

Rep. Sanders would be much better off pushing for an initiative to increase skills among workers.... instead of forcing businesses to fire people and flee the community with ridiculous mandates that they pay low-skilled workers far more than their skills earn.