On the Claim by People Such as Pete Hegseth (CEO of Concerned Veterans of America and Fox News Talking-Head) that a 10,000 Man U.S. Residual Force Would Have Prevented the Chaos that's Presently Taking Place in Iraq and Syria 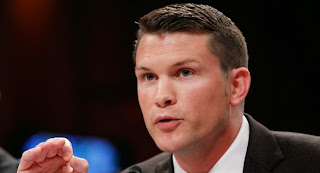 While I obviously respect this man's service, his logic leaves a lot to be desired. a) The Status of Forces Agreement that he seemingly has a huge issue with was authored by the Bush administration. b) It is highly unlikely that 10,000 troops could have held the country together. c) The Iraqis had cut a deal with Iran and one of the stipulations of that deal was that all U.S. troops would leave the country. And d) I would ask this guy the same question that I've been asking his fellow neocons; Krauthammer, Thiessen, McCain, North, etc - namely, HOW LONG? 10 years? 100 years? And what possible assurance could you give us that the same disintegration woudn't have happened then? I mean, I know that these guys despise Obama and all but to try and hang this exclusively around his neck is totally unfair.

Posted by Will "take no prisoners" Hart at 4:43 PM

Was the Hulk on his team?