The Pretty and Pretty Stupid Face of Neoconservatism 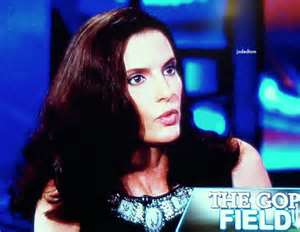 Kate Obernshain is yet another one of those partisan firebrands who, while you kind of enjoy ogling her, really tends to irritate you, too. Just this week, for example, she went on the O'Reilly Factor and basically did a Dick Cheney tutorial on the virtues of preemptive and protracted Middle-Eastern warfare; "the intelligence was unanimous" (wrong!), "Saddam Hussein supported al Qaeda" (wrong!), "Obama is cutting and running" (wrong! - the dude is basically following the Bush timetable and the Iraqis don't even want us there anymore) etc.. And the fact that she even went as far as to blame Obama for the fact that the Iranian hand has been strengthened when in reality it was the George Bush policy of de-Ba'athification that accomplished that. Look, I ain't gotta a lot of love for Obama, either, these days but, this chick, the sound is definitely going to be tweaked DOWN in the future, I'm thinking.
Posted by Will "take no prisoners" Hart at 10:03 PM

Wil, the rEpublican partee, with the exception of Ron Paul (damn I wish he were still sticking a stick in the blind eyes of the partee boses) are only interested in spreading American influence worldwide. I often believe they would make incredibly efficient empire builders. So much for the partee of liberty and individualism.

Perhaps Rand will follow in his father's footsteps. I'ts still early but indications are encouraging.

Notice the response from some on the right to Israel giving Obama.their high honor?

Rapidly becoming irrelevant is the rEpublican partee. It is time the partee figures out being fossilized is not a desirable trait.

Saddam did in fact support Al Qaeda, so this point does need attention, and this woman, as quoted or summarized here, was correct.