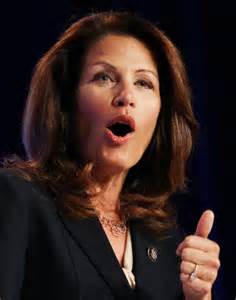 This Bachmann chick is a total douche-bag. She goes in front of a thoroughly uncritical C-Pac audience and ONCE AGAIN levels a series of bogus and trivial accusations against the President and his domestic/travel arrangements. None of it was true but by far the most precious part of all was when she was questioned about it and actually chided the reporter (CNN's Dana Bash practically had to chase the woman down the hallway simply to approach her) for asking such "unimportant questions" OF HER! I mean, it was like, "Lady, you're the frigging idiot who brought this bullshit up and YOU'RE CHIDING ME???" I'm telling you here, people, it was purely comic theater.

Posted by Will "take no prisoners" Hart at 8:54 PM

I hate to say what it LOOKS like Bachman is preparing to do. Sorry Will, I just couldn't help myself. You understand, right?

Putting that aside, the rEpublicans (Tea Party) actually take this babbling moron seriously. When she first hit the national stage O thought she might be a breath of fresh air. Didn't take long for me to recognize the truth.

This empty head gem hopefully will be retired by the people she has heretofore bamboozled.

Wow, you're right. Maybe I ought to change it....or not! LOL

What did she say about travel?

She has some good points on some things, like this issue, when in the middle of the budget crisis stuff, Obama gave his rich buddies an $11 billion unearned gift.... around the same time he specifically threatened to cut aid to poor and disabled kids in a speech.

dmark your point is taken. On the whole however Bachmann is a looney as well as a lose canon. I wouldn't want the women ANYWHERE near the seat of executive power.

Yeah, I think that if she focused on the important stuff like Benghazi and wasteful spending, she'd be fine. But when she brings up stuff like the President's dog-walker....Even Bill O'Reilly had to chastise her here.