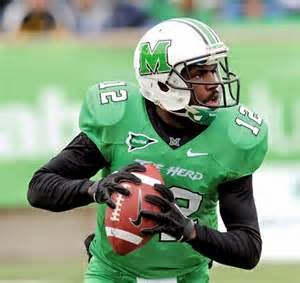 What a career; 1,128 completions (a 62.6% completion percentage) for 13,798 yards and 128 touchdowns (compared to only 44 interceptions), 814 yards rushing and 13 more touchdowns. Add to that the fact that the guy's a winner, leading the Herd to a 12-1 season where the only loss was by one point (to Western Kentucky) in overtime. I'm not entirely certain that he has the size or the arm for the NFL but I wouldn't bet against him and there's always the CFL (where smaller guys like Doug Flutie quickly became legends). In the mean time, you will get to see him again when Marshall takes on a good Northern Illinois team (11-2 and MAC champs) in the inaugural Boca Raton Bowl down in Florida. Should be a good one, folks.

Posted by Will "take no prisoners" Hart at 8:38 PM

If he was any good he would be playing in the SEC or the ACC.

He was unheralded coming out of high school, Russ, but, now, the dude could start for a whole hell of a lot of schools in the Big 5 (you obviously didn't see the bowl game last year when he totally outclassed that POS from Maryland).

When he can outclass Alabama,LSU,FSU,Ohio St.,or even a Pac 12 team then I'll take notice.

Maybe he will get a shot as a punt returner in the league.

This year, Cato would have started for Wake Forest, Syracuse, Vanderbilt, Kentucky, Clemson (they would have then been able to redshirt Watson), Boston College, Virginia, Virginia Tech, Arkansas, South Carolina, and Pitt, and that's just the ACC and SEC. I never said that he would be a great pro, just that he was a great college player, a la Kellen Moore (who also played at a mid-major).