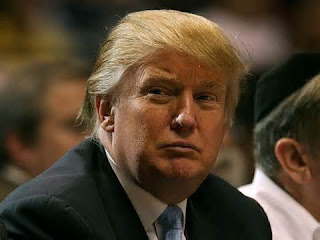 Look, I have no doubt that this douche-bag is loaded. But is he as rich as he claims to be (a net worth of 6-8 billion)? Me - I'm beginning to have some doubts. I cite specifically the fact that he kept on telling us that NBC was paying him a "tremendous amount of money" for that Apprentice show/idiocy. I mean, think about it here. What would have been the most that NBC would have been willing to fork over (to Trump) to keep that train-wreck going; 10 million? 20 million? A whole lot of money absolutely but to have a supposedly multi-BILLIONAIRE constantly referring to it as a "tremendous amount of money" is at the very minimum suspicious, I think.

There is a sort of Wizard of Oz thing going on. And the man behind the curtain has hair like a bicycle helmet.

He's always been a jerk but I somehow seem to remember him being more reasonable in the past.

I don't know the totality of Gore's record as a Senator but, yeah, he seemed to be a hell of a lot more sane in the past, too.......Gingrich, the third stooge, I can't say that I ever liked him.

Off topic... Meanwhile, WD has managed to find his way over to my sight. Will have to wait and see how he behaves. Already had to delete one comment.

Part of me want to like him because I tend to root for underdogs but (like I'm sure that you're aware) it's difficult.

Not much to like there, Will, considering he faked your ID and posted in my blog as you in a temporarily successful attempt to get around it when I banned him forever.... because of dozens of comments in which all he talked about was penis length.

He definitely brings out the worst in me, that's for sure.

dmarks, why can you not stop lying? I "faked" Will's ID one time, said nothing of consequence, and then TOLD you about it. You did not figure it out as you're suggesting here. Also, you banned me BEFORE the "penis length" comments. I submitted them when you had comment moderation enabled. No one but you ever saw them. Also, it was a joke based on you falsely claiming that an on topic comment of mine (that you deleted) was Spam.

He has a blog where he not only writes the postings but also the comments. He is also fixated on Will....stalker.

He's wasting his time on me when he could be stalking Jennifer Aniston or Alysa Milano instead. Damn.

If WD apologizes for faking Will's ID and for the troll/spam comments, I am willing to let it go.

I watched the Trump program a few times in it's original incarnation but soon tired of it. Never watched the "celebrity" version. Some may be interested in watching washed up former stars make fools of themselves, but it isn't for me.

Also, Rusty is right about the WD guy "stalking" analogy... I looked at his blog and there are many posts bashing both Will and dmarks. If you look dmarks you will see that he has said far worse things about you (on his blog). I doubt you'd be willing to let bygones be bygones if he ONLY apologizes for the 2 issues you list.

Barlowe: its just blogs. Its not like it is Sicily here.

I think that he actually did a couple about me being a moderate extremist....Those were actually pretty humorous.

He's trying to suck me into an argument over at your site and I just can't do it (the damned brevity of life for one thing).