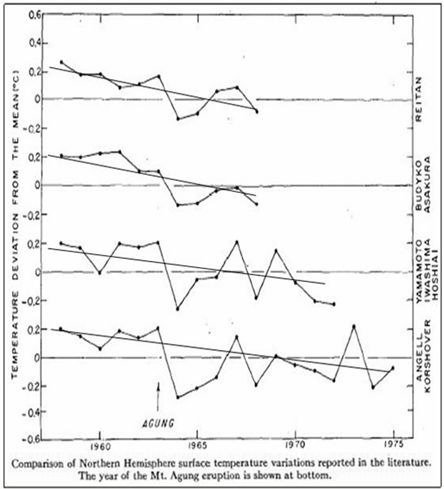 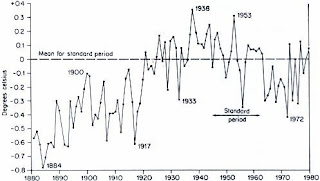 The scientific evidence is overwhelming that the earth experienced a significant amount of global cooling (as much a half a degree Celsius) from 1940 to 1975. The data involved is especially solid after 1958 in that that was when weather stations started utilizing radiosonde balloon data (a technique that has shown to be virtually consistent with the satellite data of post 1979). But, just like with pretty much everything global warming, a funny thing happened on the way to the forum (or in Al Gore's instance, the Oscar ceremonies). It seems, folks, that James Hansen (the author of the second and third graphs, the third being the adjusted one) ultimately didn't care for this little piece of reality and decided instead to "adjust" it a tad. So, instead of having a scenario in which the temperature actually went down for approximately 35 years (this, in spite of the hard evidence that man-induced CO2 emissions were skyrocketing), you magically had it simply taking a breather. This is absolutely unbelievable, folks.
Posted by Will "take no prisoners" Hart at 4:58 PM

Is Will Hart of Contra O'Reilly single-handedly exposing the global climate change conspiracy? I'm not as obsessed with this topic as you seem to be. The liars seem to have won, but it is a hollow victory, as we aren't signatories to the Kyoto protocol, and there appears to be about zero chance that we're going to spend those trillions you seem worried about us spending to combat the "problem".