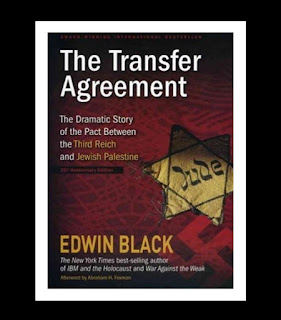 Apparently he was in that as Edwin Black's 1992 book, "The Transfer Agreement", completely shows, Hitler and the Zionists of Germany had arrived at a compact in which in exchange for the Jewish boycott of German products being lifted, Hitler would assist the Jews of Germany to migrate to Palestine. AND THE PLAN WAS WORKING (tens of thousands of German Jews and their belongings making their way to British-run Palestine from 1933 to 1939; a trend that only stopped due to the war)!! It was working......until we fucked it up. Thank you, Winston Churchill.

Posted by Will "take no prisoners" Hart at 5:28 PM