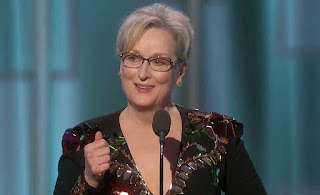 I didn't vote for Trump and don't particularly care for the fellow. But the more that pieces of shit like Meryl Streep try to vilify the dude beyond all human recognition, the more willing that I seem to be to at least give him a chance.............And he didn't make fun of that reporter for his disability in that as even as Piers Morgan has stated, a) Trump has used those same gestures numerous times before (on Cruz, some general, himself, etc.), and b) the reporter (who Trump hadn't even seen for some 20 years) can't even move his damned right arm and so how is Trump flailing even a logical impersonation? Look, I get it, these celebrities don't like Trump but can they at least display a modicum of fairness, integrity, and decency? I mean, they're pushing 70, a chunk of 'em.

Posted by Will "take no prisoners" Hart at 5:21 PM