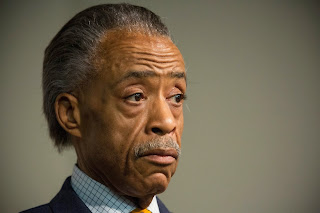 If a white person in black face went on TV and acted like this horse's ass, the outrage would be harsh, unrelenting, and deservedly so. But because this fellow is black there is almost total silence from the left. I mean, I know that the white liberals won't touch it out of political correctness and the black community is no doubt hesitant to throw him under the bus (out of solidarity perhaps) but this guy is such an embarrassment (the fact that he's stupid, a rank opportunist, a hypocrite, etc.) that something really needs to happen here.

Posted by Will "take no prisoners" Hart at 7:32 PM

I have to hand it to Greg Gutfeld....he had the balls to say Sharpton is just down right dumb...and he is. Just listen to this idiot try to talk....that great show In Living Color had a segment with a black guy trying to talk using words he didn't understand and didn't know what they ment.....this is Sharpton

Dude is who he is. Divisive individual who thrives on unrest.

I remember that segment, Russ. Dude was in prison, right?

Rusty... some talk a lot faster than they think. Like Sharpton.

Others... and mind you, these examples are from years ago when I used to watch such shows... think much faster than they talk. I include Charles Barkley and Camille Palin in this group.

I think that his name was Oswald.